Member
Which was a great idea by @Jeroth

I posted it in Discord, but here's the First Poll. Do it if you haven't already.

Member
If you're Nate Silver, make sure you don't predict TC winning.

The majority of forumers following the case look less favorably upon Tirin for his role in it, with no respondents thinking better of him for it. As for Coolpool, few forumers had their opinions affected at all by the case. Of the few changes of opinion, Coolpool gained ground overall.

The court case was a blunder and setback for the campaign, plain and simple. Is it simply for targeting a beloved forumer? Or for weak charges? Or out of some plain old courtroom fatigue? Or, likely, all of it. With over a third of voters ranking the candidate a 1, and not enough first place ballots in his favor, the incumbent needs to do work if he wants to keep his seat.

Zircom still holds some popularity thanks to his agreeable platform of "No More Dunsparce" and being a pretty sweet dude, but Out of Sight, Out of Mind is keeping him at what can be roughly evaluated as third from the bottom.

Coolpool: Candidate Says He's Not Running! Half of Forum Disagrees!

The forum is sharply divided upon his candidacy. It's clear that the voters are one of two camps. Either they are adhering to the candidate's wishes, or they are going to vote for him anyway. Given his widespread popularity and likability, the biggest obstacle between Coolpool and victory are two words: "I'm running".

Like Zircom, this is a candidate with no publicity. Unlike Zircom, there's nothing to fall back on. While preferential voting allows for a crowded race, the odds seem insurmountable for Wilger.

Walrus: Community Turns Out to Save Walrus Funraiser! Community Doesn't Turn Out to Vote Walrus!

To be fair, these results are slightly better than expected, but not good enough for any sane candidate to continue without a massive change in opinion.

TC's favorability mockup is similar to Tirin's, though slightly better. While he has a decent shot at some third choice votes, the massive bloc of 1s is a chain on his ankle. His greatest advantage is that he currently has the most top choice votes, and therefore is guaranteed to survive at least the first few rounds of culling, though how well he does in those rounds is debatable.

One respondent did rate TC a 1, then voted for him anyway, so it looks like he has the Firedemon demographic locked up.

With favorables unseen since Wolfy, and a preferential voting system, Jeroth is a stealth favorite for this race... if he can earn enough first place votes to move on. Many voters find Jeroth as favorable as their top candidate, but he needs to live long enough to get those second choice votes.

Member
Love the commentary. Really keen to see how the race goes!
m8

Member
Stealthy's such a nice guy, putting his blog info on the forum in text form. Here's his stuff straight from the blog! 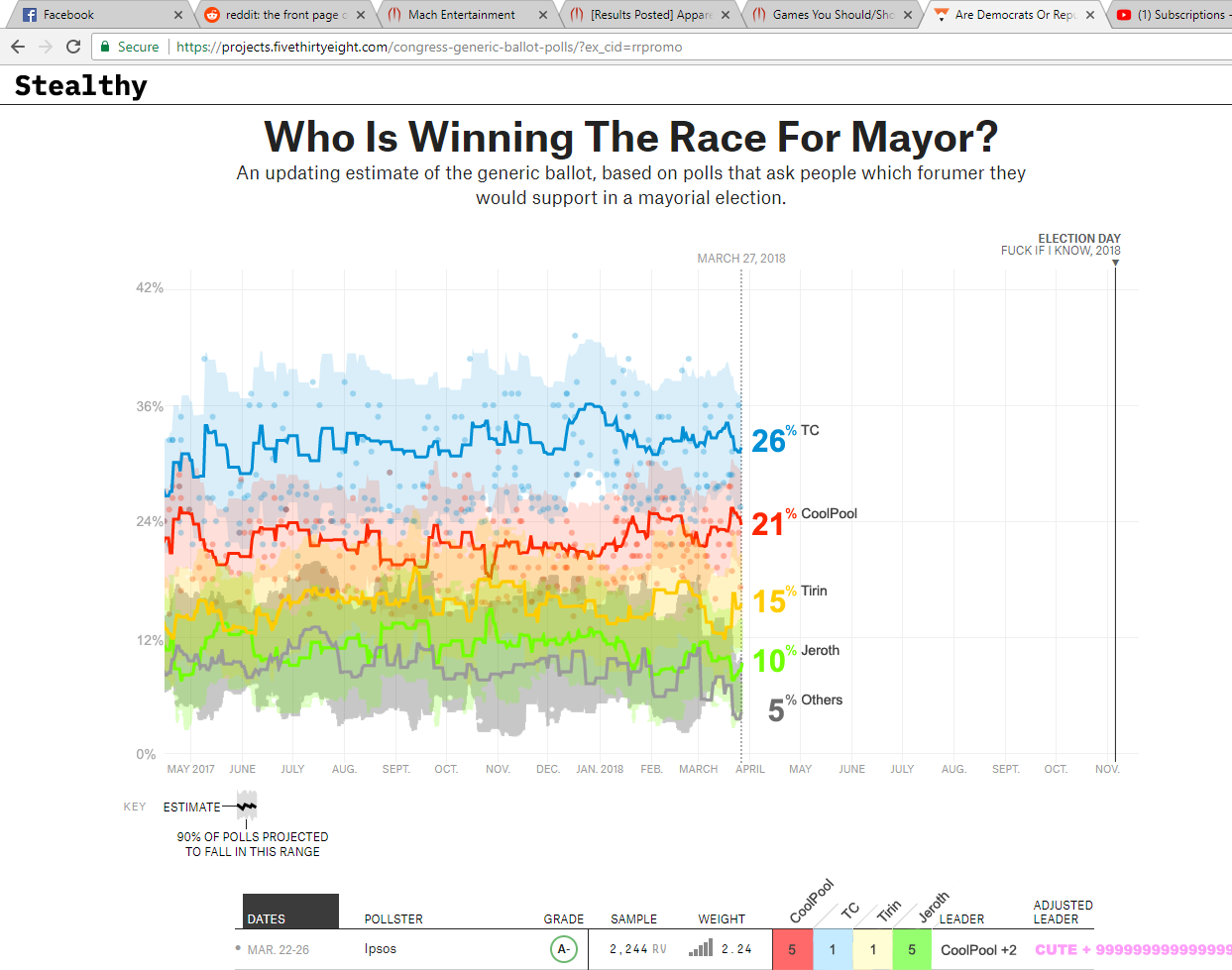 Member
Lumpy with the prophecy.

Member
TC's first arc as a villain is almost complete

Moderator
Just out of curiosity, what was the sample size for this poll?

Donor III
Since Coolpool isn't running, it looks like the #2 picks of his voters may decide the election.

Time to start courting the cutiepool demographic, but how...

Moderator
My goodness, that's quite significant given the size of our voter base.

You know, frankly - I think that it may be time to go back to what works, instead of all of these newfangled tactics promising support, activity, and Tirinomics. To make Mach Entertainment great again, I'll return to what got me elected in the first place: widespread oppression of political dissidents for the purpose of suppressing political dissidence.

I will promise all of you one thing: Tyler will suffer badly for the injustices that he has perpetrated against this forum and all of its inhabitants. And lemme tell you something about the Danger - I'm gonna bring it all back!

Donor III
The Danger is already all back. It was within 24 hours.

Good to know that our otherwise overconfident Mayor, Angry Tirin, is feeling pressure though. Sad!

Moderator
Yeah, I'm so sure it is. We've got a criminal convicted of some serious, awful shit saying it's all back - and there's nobody to verify it but him. Frankly, Crooked TC should be locked up!

I mean, you've been doing this already in the court with flimsy charges that Easy could barely even punish after the defendants (foolishly/lazily) pled guilty...

I'm doing a fine job at that myself!
Click to expand...

Moderator
That's neither widespread nor intense enough. Besides, my case with Rondait was entirely legitimate - and, frankly, I respect him pleading guilty to avoid wasting the court's time.

How many communions do I have to go through before I've eaten an entire Jesus?

Firedemon said:
I mean, you've been doing this already in the court with flimsy charges that Easy could barely even punish after the defendants (foolishly/lazily) pled guilty...
Click to expand...

"Could" is the wrong word, but let's just say that I was not prepared to have to handle a goddamn guilty plea on that one.

tl;dr need to edit out the C, N', DULT. Move some letters closer together, add an E and two S's. I'm not much for photo correction* myself, though. Someone wanna try asking Reddit about it?
"I'll be as slow as I want" -Tirin
"I hate everything you choose to be, Easy" -Req
You must log in or register to reply here.
Share:
Facebook Twitter Reddit Pinterest Tumblr WhatsApp Email Link
Top Bottom